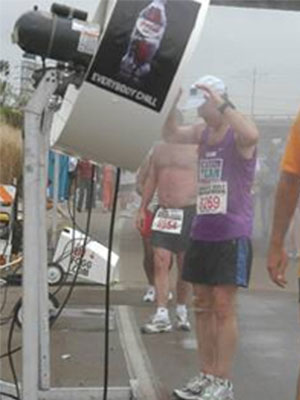 The Cool Zone was unbelievable. As I approached the 20 mile marker, my body was starting to feel the effect of the marathon distance. Then I saw the Cool Zone Misting Fan station. Boy, did it help me rejuvenate and continue on re-energized. I loved them! Cool Zone’s Misting Fans should be used at every Marathon, acclaimed Eric Sears of Los Angeles.

Fred Valle, General Manager of Cool Zone, stated: It was quite a challenge to set up those eight (8) Misting Stations. They closed down the roads at 4:30 AM and started the race 2 hours later. We had a crew of six technicians that set up the twenty-eight (28) Misting Fans. Cool Zone technicians stayed ahead of the runners, and left a misting specialist at each misting station. Coordination and organization was essential to pull this one off. Having eight mister locations along the route and at the finish line was terrific for both the runners and the crowd. We plan to offer a similar Misting System for the next Los Angeles Marathon.

With the great cooling performance that our misters provide, be sure to call Cool Zone to supply your Misting Systems needs at your next special or sporting event.